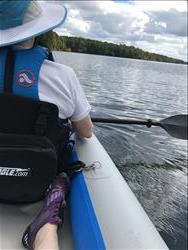 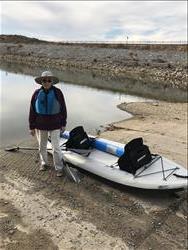 This was purchased as our THIRD Sea Eagle boat. I take my 87-year old mother out frequently and needed a stable but fast, sleek kayak that was easy (easier) to get in and out of. I'm old, too. It took us awhile to make the chine (sp?) smooth but we're very happy with the result. It inflates as nicely as our other boats, is nice and light to carry to the water, tracks beautifully, looks good on the water, takes motor boat wakes well (and they are fun!), and then is much easier than our 370 to get her in and out of and remain dry. I do not stay dry. We got the Pro version with the tall back seats so we have great back support. We added a few things; the 5" cushions for the seats, the foot straps so we could use our whole bodies when paddling, and the cart to make transport to the water easier. We are very happy with this purchase and our boat.

We have two Sea Eagle FastTrack Kayaks and two NeedleNose Paddle boards on board our 160' motor yacht. Although we are strictly a private yacht, we are used actively as are our Sea Eagle products. We travel the world so when we have issues it is never easy for vendors to respond as we are actively moving and intercepting us can be challenging. We had issues with each of them at different times but Sea Eagle stepped up to the plate and replaced each product as the problems occurred. We have now had our new kayaks and paddle boards for a year or more and they have been trouble free. Must have been a bad run, but it makes all the difference when the company stands behind their products. Hat's off to Sea Eagle!

I'm very pleased with his kayak. Handles well. At first I was a little leery buying inflatable, but this one proving to be very sturdy and I feel very confident in it. I also get a lot of comments on it from other people. I took both my parents out on it and they loved it!

I like the kayak very much. The only complaint I have concerns the fishing seat. The straps that hold the seat to the kayak can come loose and can result in dumping you in the lake. I also need to add an anchoring system to this kayak. Looking forward to more days on the lake!

We actually bought two boats. We bought the first one to "try it out" since we'd have to pay shipping to return it if we didn't like it. After we received it and tried it out, we bought a second boat.

We've used it in lakes, and in the bay in New Jersey. The boats handle well, but only if you attach the included rudder board- otherwise they're too hard to keep straight. They are easy to set up and fold away, easy to transport, and very stable to ride in. They seem to be ruggedly constructed too.

We are both tall people, and would prefer longer paddles than what came with the package- but I guess we can buy additional paddles when we find suitable ones.

My wife took hers to a kayak "meet-up" group. When she first arrived, the person who organized the event didn't want her participate because he had bad experiences with people who had inflatables. However, after seeing our boat and watching her use it, he was impressed with it.

We have been very happy with our Sea Eagle 385. After one season we have had some excellent river trips. The craft performs excellently in class II water. We're looking forward to some multi-day trips this next summer. It has proven to be a comfortable and safe craft. I much prefer it to my previous kayaking experiences. We're looking at adding a second one to our fleet.

The Sea Eagle 385F has been perfect for our lifestyle! We have been living full time in a motorhome for almost one year and our Sea Eagle has been used in many states during our travels! It is convenient for us to store when not in use and easy to inflate! It is sturdy and the Sea Eagle is a smooth , stable ride. We love it and the one thing i would like to add is your customer service was superior...thank you! We receive compliments and inquiries and always give you an A+ rating!!!

Solid boat with good balance and great skin durability. Eight minutes to launch and the boat, paddles, pump, etc., fits easily on our Yakima box. Smooth ride on lakes and ocean (we live on central coast of CA). Class III+ through Hell's Gate on Rogue River was super. Fishing. SUP, cruising w/our dog, no problems at all. Recommend this boat without reservation. 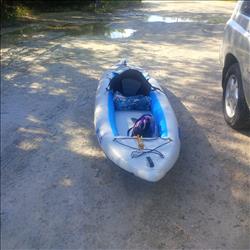 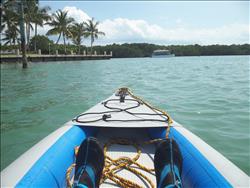 I love my inflatable kayak . . have used it in the ocean (Florida Keys), mangrove creeks, several lakes in Southern Illinois . . even in windy conditions, it performed well. I'm 66 years old and can get it out of the SUV and ready to go in about 10 minutes now that I'm familiar with it. My only complaint would be the instructions booklet . . but the customer service was very helpful on the phone.

Very durable and stable . . sits two tall people with a small cooler and dry bag . . can't imagine fitting 3 adults as it says . . tho the 600+ pound limit makes it possible. Seems it should come with 2 paddles and 2 seats.

I did a lot of research and was leary of an inflatable but the 180 day money back trial sold it for me . . I was going on a trip to FL Keys and knowing I could return if it wasn't satisfactory told me that Sea Eagle is confident in the quality and usability . . and rightly so. Also a 3 yr warranty is the best around. 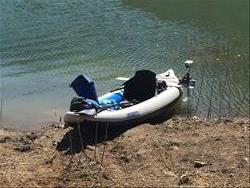 Great boat, loads of fun. I'm 70 years old and a full timer in a motorhome traveling anywhere the wind blows us. We carry the boat in one of our side storage compartments and when the water calls I pull it out using the foot pump and about 20 minutes I'm ready for the water.This past summer we were in lake Shasta and found many places to explore. I also bought the electric motor and battery and when I run out of man power I turn it on and way I go. Also when the wind picks up the electric motor is a good offset to help out. I also bought the back pack with rollers to move the boat to the water this has been very helpful. Many times I enjoy sole kayaking but doubles are a lot of fun as well. Very happy with our purchase.

Get One for FREE!